We are nine days away from opening day, and if that’s not enough to get you excited about a new baseball season, perhaps some new Nationals swag will.

Managing principal owner Mark Lerner first teased a new alternate jersey for this season during a March 21 spring training game broadcast on MASN, and mentioned the Nationals have been working with Nike on these for a while now.

“Washington, D.C.’s cherry blossoms represent hope and new beginnings, making them the perfect symbol of this Nationals team,” said Lerner in a statement. “We’re excited to unveil these beautiful uniforms as the embodiment of our historic organization’s hopeful future as we lead the District of Cherry Blossoms celebration with our friends at the Wizards.”

While we have been anticipating a cherry blossom-themed uniform release for the Nats over the past couple of weeks, we were not expecting it to be a collaboration with the local basketball team as well. 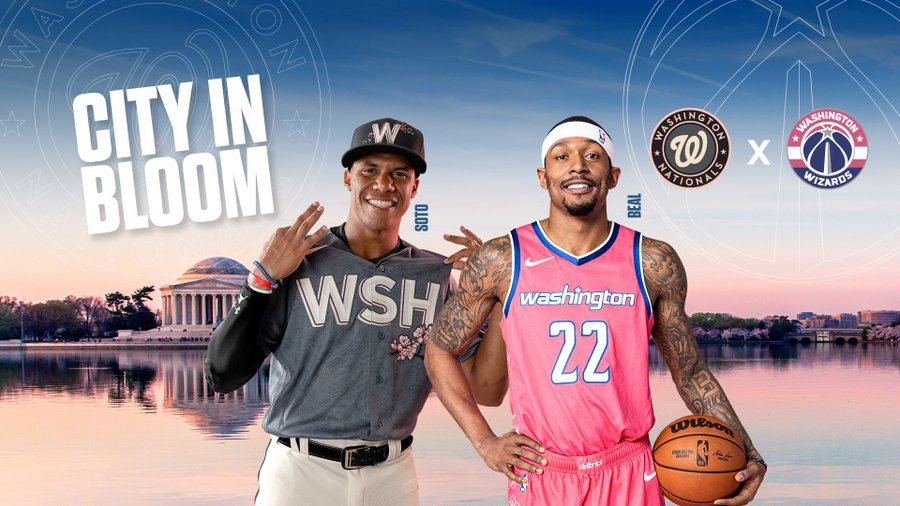 The Wizards will join the Nationals this fall in celebrating the District of Cherry Blossoms, which is Nike’s first uniform campaign uniting multiple teams from the same market around one theme. While both uniforms share the city’s iconic cherry blossoms, the Wizards’ City Edition jersey will feature its own distinct expression and narrative inspired by the pink flower.

The Nationals’ uniform uses creative elements that weave a connection between the team and the region it represents. The architectural typeface of “WSH” across the chest and a “W” on the front of the hat represents the city’s strength, while the tonal floral toile is a symbol of its beauty. The pink and ivory color palette is set against a dark anthracite background, meant to evoke the feeling of spring in D.C. Cherry blossom petals and branches, along with the Washington, D.C., city flag, are prominently displayed, showcasing the pride the Nats have for their hometown.

The cherry blossom motif will be featured throughout the season at Nationals Park, including on souvenir cups and ice cream helmets at concession stands. All bar and club locations will also offer a Cherry Blossom Cocktail, exclusively created for the Nats by D.C.-based Pratt Standard Cocktail Company.

The Nationals will wear these uniforms during select games throughout the 2022 season, The City Connect uniforms will make their on-field debut during the team’s opening weekend on Saturday, April 9 at 7:05 p.m. and Sunday, April 10 at 1:35 p.m., with both games against Max Scherzer’s Mets.

Nats fans will be able to get their hands on cherry blossom merchandise exclusively at the Nationals Team Store, MLBShop.com and neweracap.com starting on Wednesday, March 30 at 10 a.m. through April 4. The world-famous Budweiser Clydesdales will deliver City Connect merchandise to the Nationals Team Store on March 30, while making a few surprise stops around the Navy Yard neighborhood before pulling up to the Center Field Gates. Fans are invited to attend Wednesday morning’s launch party to take photos with the Clydesdales, sample food and beverage offerings, win tickets to opening weekend games and more.

The multi-team District of Cherry Blossoms celebration kicks off tonight as the Wizards host the Bulls for Cherry Blossom Night at Capital One Arena. The game will feature joint creative elements from the partnership and a special Nationals mascot appearance. The Nationals and Wizards will collaborate on other thematic initiatives throughout the calendar year as the Wizards’ Nike City Edition jersey makes its on-court debut during the 2022-23 National Basketball Association season, and both teams will be showcased in the annual Cherry Blossom Festival Parade on Saturday, April 9.

For more information and to buy tickets, visit nationals.com/CityConnect.

The only question that remains: Will other D.C. teams join the cherry blossom-themed hype train?