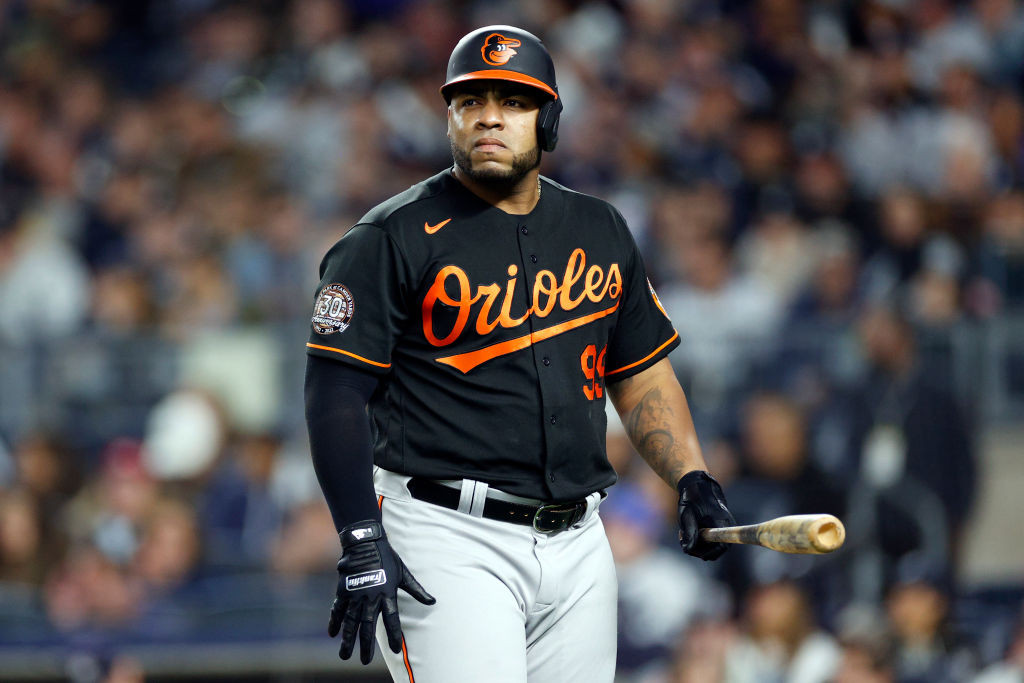 One of the responsibilities of being a fan is also serving as armchair general manager. The pay’s lousy but one of the perks is you can’t be fired.

Not everyone is going to fit in the dugout. Someone has to move up to the suites and make the hard roster decisions.

I have three questions for you to consider.

Would you re-sign Jesús Aguilar?
Aguilar sneaked into the trade deadline craziness on Aug. 31, the unexpected guest knocking on your door, when the Orioles signed him as a free agent after his release by the Marlins four days earlier.

The Orioles saw an opportunity to grab a power bat and included him on their expanded roster. He was an All-Star with the Brewers in 2018 while hitting 35 home runs and finishing with 108 RBIs and an .890 OPS. He had 22 homers and 93 RBIs with the Marlins in 2021.

Latest look at 40-man roster before it changes again 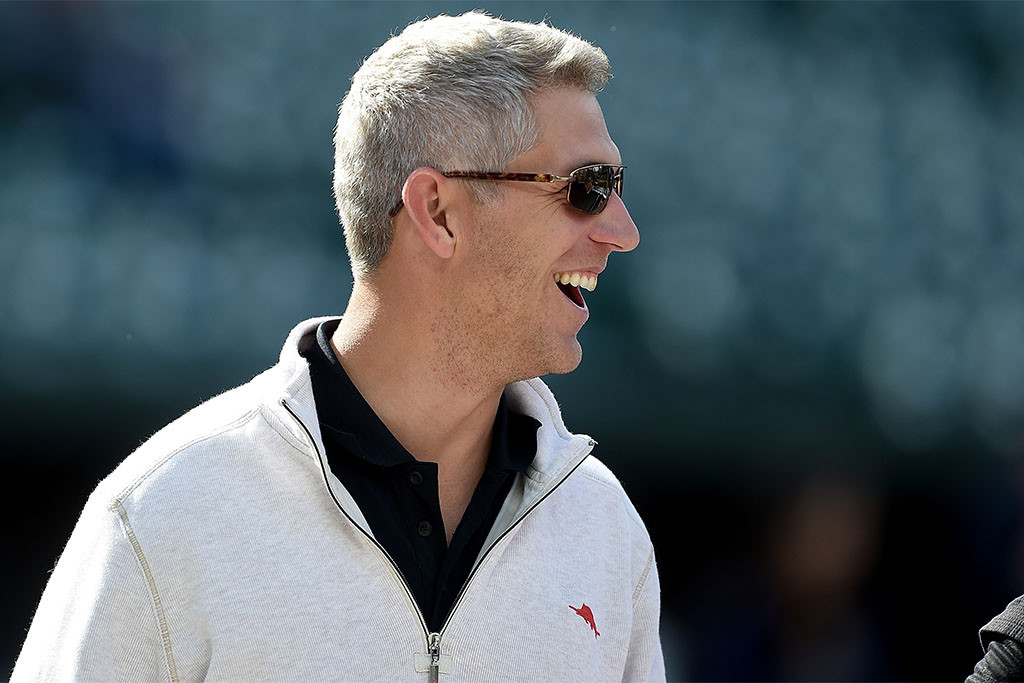 I’m old enough to remember when the Orioles didn’t have any catchers on their 40-man roster.

OK, that was earlier this year. But I remember.

Pedro Severino and Nick Ciuffo were the holdovers in November after Austin Wynns had been outrighted and declared for free agency. And then they were gone, too.

Robinson Chirinos agreed to a one-year, $900,000 contract in March. Anthony Bemboom made the club in spring training after signing a minor league deal. And everyone waited until the Orioles selected Adley Rutschman’s contract, which removed Bemboom from the 40-man roster.

Bemboom has returned to it. The Orioles selected his contract on Oct. 6 and signed him to a one-year deal on Wednesday, a split contract like most of them under these circumstances, with his salary based on whether he’s in the majors or minors. 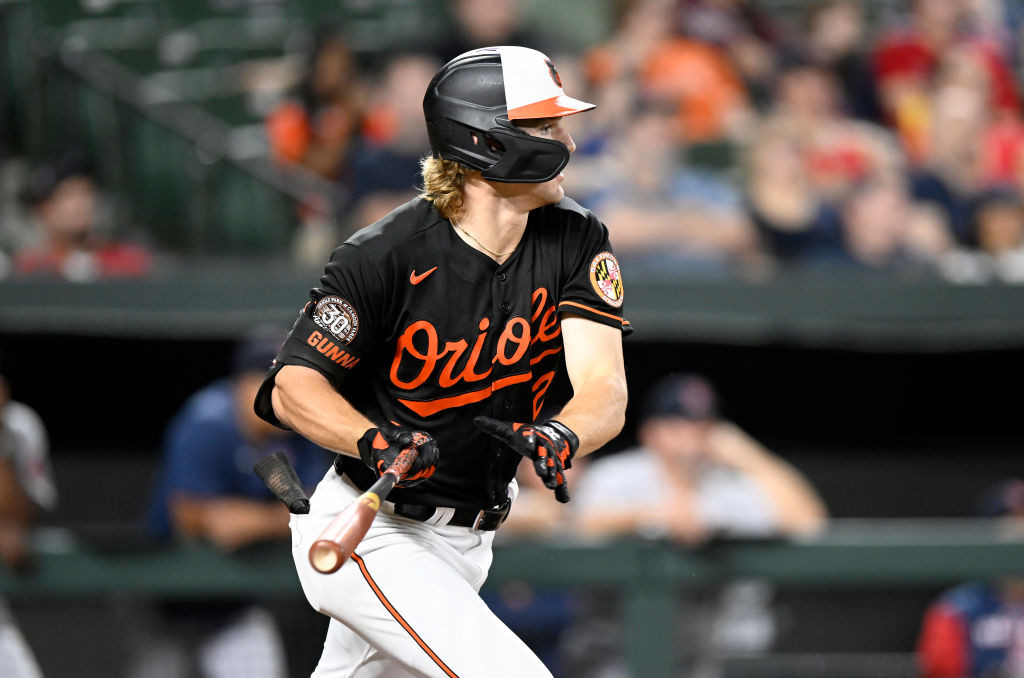 Gunnar Henderson stays at third base tonight as the Orioles try to win their third game in a row.

Manager Brandon Hyde is starting Ramón Urías at second base and using Jesús Aguilar as his designated hitter, with Kyle Stowers and Terrin Vavra on the bench – moves motivated by Astros right-hander José Urquidy being a reverse splits guy.

Austin Hays is in left field after entering last night’s game as a defensive replacement.

Anthony Santander is in right field and batting cleanup. 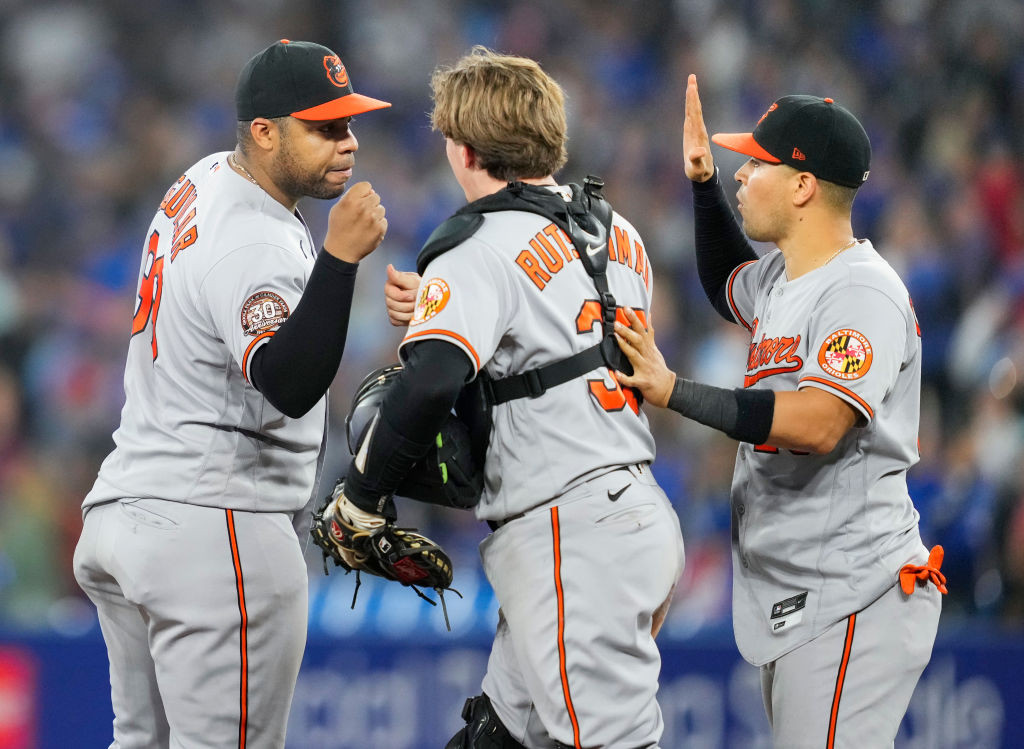 OK, that is a stretch. But heading into Sunday’s series finale at Toronto, some fans must have thought that the rookies were doing their part. When would the vets pick up some slack too? Well one did late in the game yesterday and in a very big way.

It was an unlikely candidate in Jesus Aguilar, the first Oriole ever to wear a number in the nineties. But beyond that distinction he had struggled badly in his first eight O’s games. Once an All-Star in 2018 when he drove in 108 runs with a career OPS of .772, his O’s OPS was .261 at game time Sunday. He was only in the lineup because Ryan Mountcastle was hurt.

Then Aguilar, who started his day 0-for-3, hurt the Blue Jays.

His solo homer in the eighth was his first with the Orioles and pulled them within 3-2. After Adley Rutschman’s two-run single gave the O’s the 4-3 lead in the ninth, Aguilar singled in their fifth run. And they needed it when Toronto pulled within 5-4 in the home half of the ninth.

O's comeback: They rally for three in the ninth to beat Toronto, 5-4 (updated) 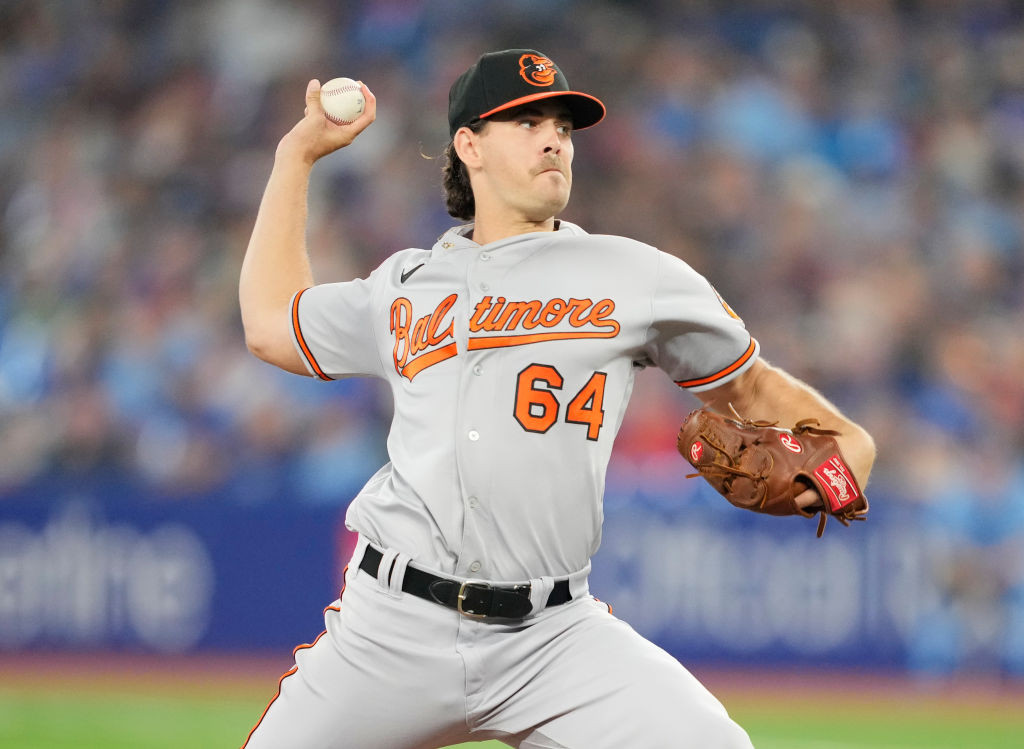 TORONTO – After 26 innings of mostly frustration on offense this weekend in Toronto, the 27th inning proved quite fruitful for the Orioles today.

Against right-handed All-Star closer Jordan Romano, one of the saves leaders in MLB with 34, the Orioles scored three runs in the ninth on Adley Rutschman’s huge two-run single and an RBI single by Jesús Aguilar.

The Orioles, who never led today until the ninth, beat Toronto 5-4 to salvage the final game of this series.

Winning for just the fifth time in 13 games, the Orioles come home at 76-69, and this win sparked a little life into their flickering playoff hopes.

Romano had recorded 14 consecutive scoreless appearances over 15 innings and had allowed just one earned run this season at home in 28 games. His home ERA of 0.31 was the best among all qualified MLB relievers. 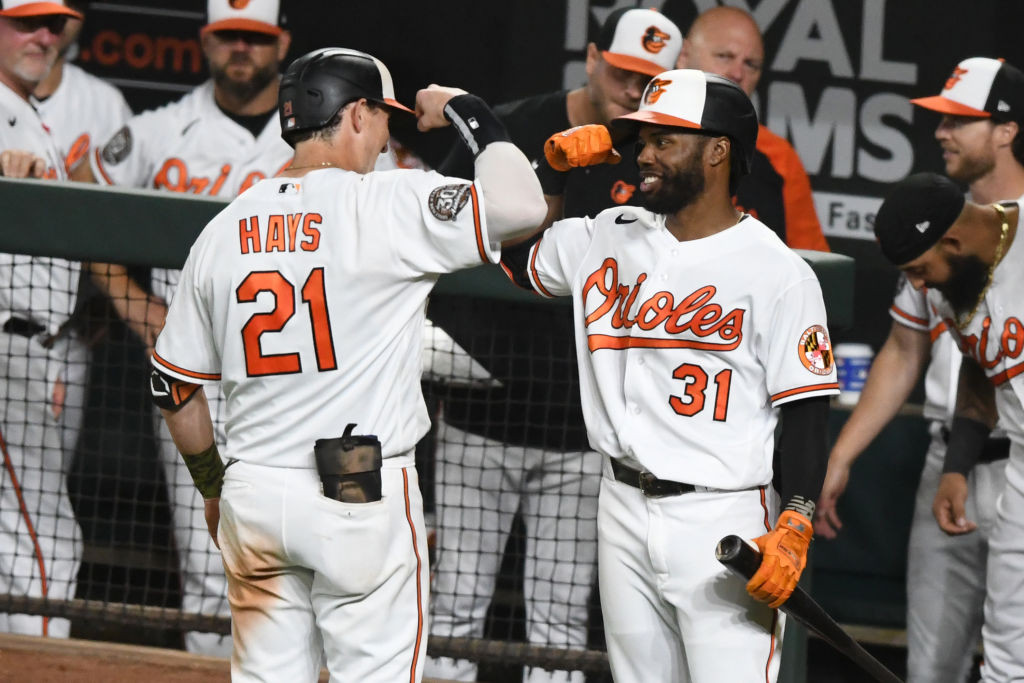 Manager Brandon Hyde is going with a predominantly right-handed lineup against Nationals lefty Patrick Corbin. Ryan McKenna gets the start in center field and Ramón Urías stays at second base.

The only left-handed bat belongs to rookie Gunnar Henderson, who starts at third base.

Odor’s right hand wasn’t wrapped today. Mullins was hit on the right hand last night and stayed in the game.

“There’s a pretty good chance you’ll see them both in there at some point,” Hyde said. 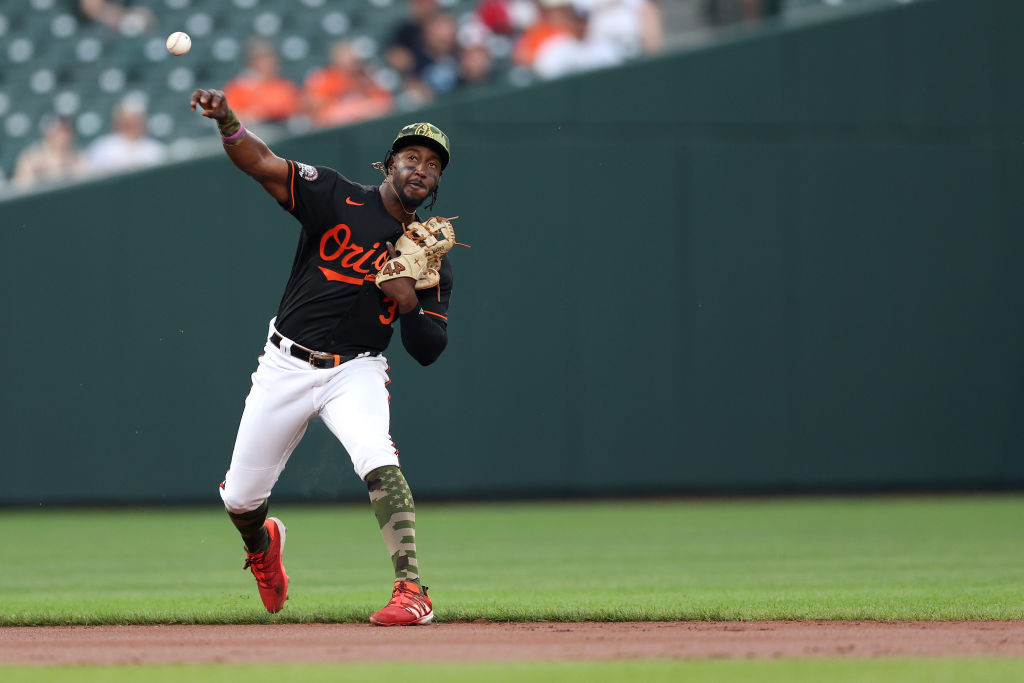 CLEVELAND – Gunnar Henderson is playing shortstop tonight for the first time in the majors, with manager Brandon Hyde wanting to move him around the infield - mainly on the left side. But Hyde also wanted to provide some rest for Jorge Mateo, who hasn't been idle since July 30.

Mateo has appeared in 121 games in his first full season in the majors. He could use a breather.

“It’s just giving Jorgie a game off,” Hyde said this afternoon. “I can’t remember the last time he’s had a game off. We’ve got a long stretch ahead of us and just wanted to give Jorgie a day today.”

Same with outfielder Austin Hays, who joins Mateo on the bench. Nothing related to his health.

Henderson provided a jolt to the offense last night with his home run and single, but Hyde isn’t asking him to carry a heavy load. 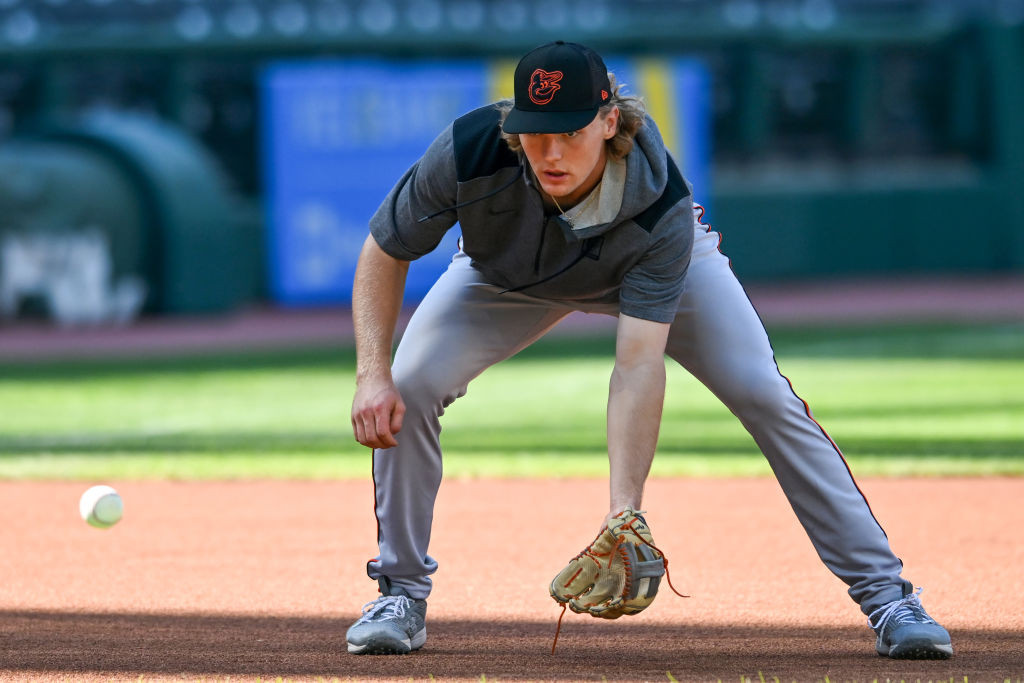 CLEVELAND - Gunnar Henderson is starting at shortstop tonight as the Orioles conclude their road trip and try to win their series against the Guardians.

He stays on the left side of the infield.

Henderson is batting fifth behind Ramón Urías, who moves to third base.

Jorge Mateo and Austin Hays are on the bench. Jesús Aguilar is the designated hitter in his first game with the Orioles.

Terrin Vavra is in left field and batting ninth, and Anthony Santander is in right. 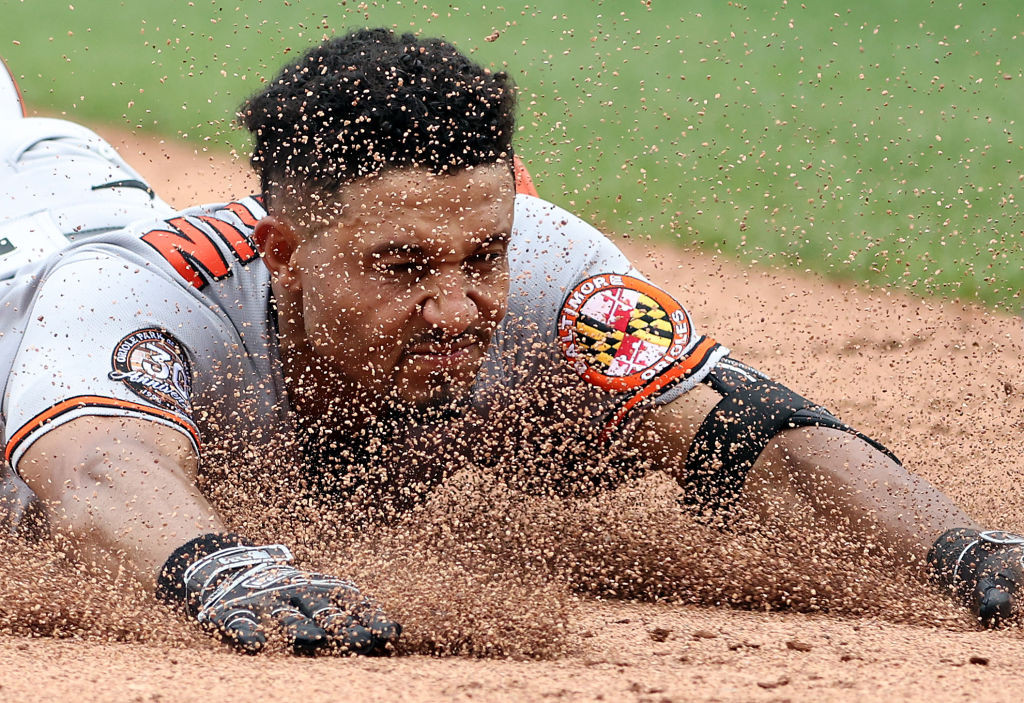 CLEVELAND – The Orioles designated infielder Richie Martin for assignment this afternoon to make room on the 40-man roster for first baseman Jesús Aguilar, whose contract was selected after he signed a minor league deal yesterday and joined the taxi squad.

Left-hander DL Hall was recalled today to give the Orioles 28 players in the new month, which begins with them only two games out of third place and two behind the last wild card spot.

Aguilar is the first Oriole to wear No. 99.

Recapping a busy day for Orioles 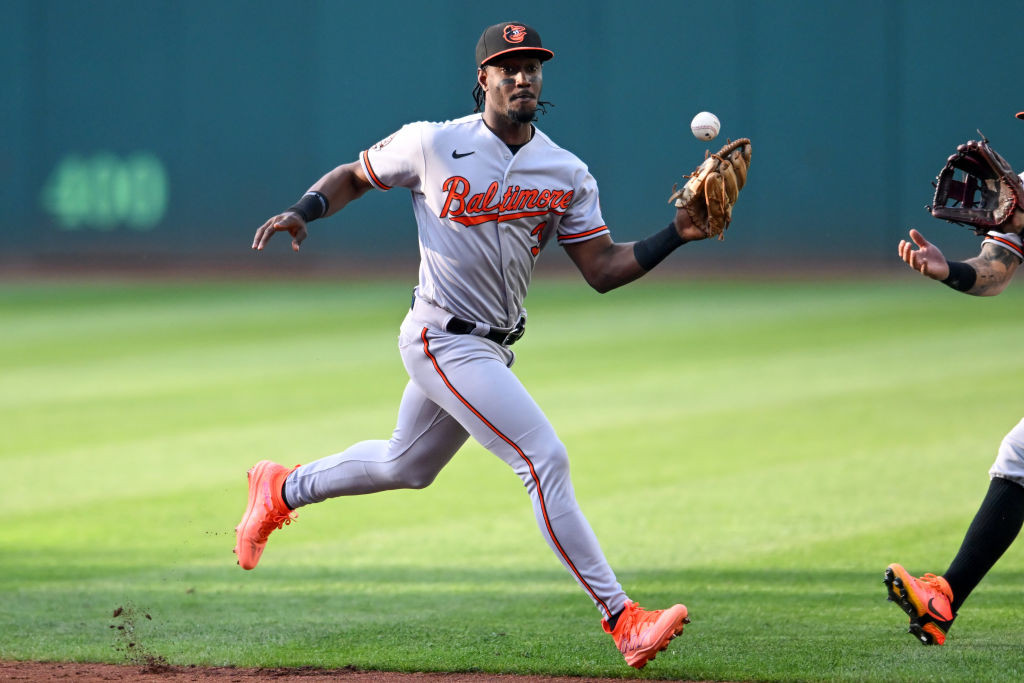 A nine-inning baseball game last night felt like the calmest moment that the Orioles experienced, even in the heat of a pennant race.

Roster moves were distributed to the media as if shot out of a T-shirt gun. The spring training schedule was released, minus report dates and times.

Active rosters grow from 26 to 28 players, and we already know that the Orioles are using those spots on Aguilar and left-hander DL Hall.

Rewinding to yesterday’s activity, the biggest surprise might have been the selection of Gunnar Henderson’s contract rather than his placement on the taxi squad, which was the plan Tuesday night.

More on arrivals of Henderson, Aguilar and Hall

CLEVELAND – Orioles manager Brandon Hyde watched Gunnar Henderson hit on the field hours before batting practice, an early session that confirmed everything he knew about the former second-round draft pick. The tools on display. Some of the reasons why he rates so highly among scouts and talent evaluators.

Why he’s the youngest Oriole to debut since Dylan Bundy in September 2012. And the youngest position player since Manny Machado that same year.

“It’s really impressive,” Hyde said. “It’s so physical, so strong, and it’s exciting to have another one of our top prospects here.”

Henderson is least likely to play first base with Ryan Mountcastle entrenched as the starter and Jesús Aguilar going from taxi squad to expanded roster on Thursday.

“We’re going to play him multiple spots in the infield,” Hyde said after writing Henderson’s name at third base on the lineup card. “It’s something he’s been preparing for down at Norfolk, getting a lot of reps. Recent reps at second base, shortstop, third base. He’ll be day-to-day with where we put him in the infield. 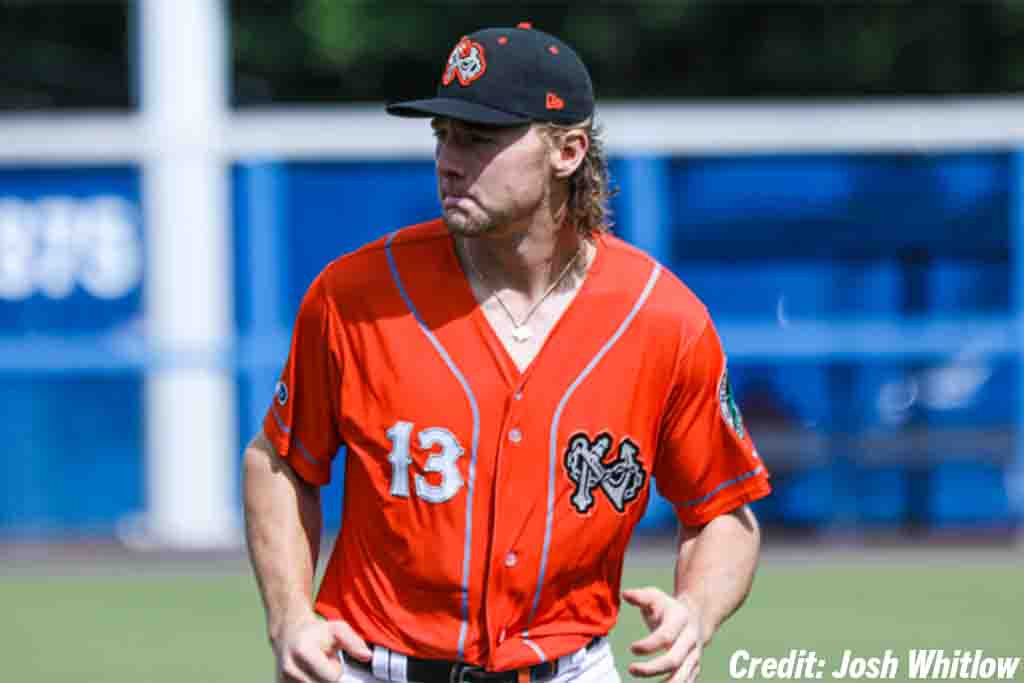 They did it early this afternoon, bringing up Henderson and optioning infielder Tyler Nevin to Norfolk.

Pitcher Denyi Reyes was designated for assignment to create room on the 40-man roster.

Henderson, who’s wearing No. 2, could be in tonight’s lineup against Guardians right-hander Triston McKenzie. We’ll find out later.

The first appearance will allow Henderson, 21, to become the youngest Oriole to make his major league debut since infielder Manny Machado in 2012. Machado was a first-round shortstop who switched to third base. Henderson is a second-round shortstop in 2019 who’s played all four infield positions in the minors, gaining experience on the right side this month.