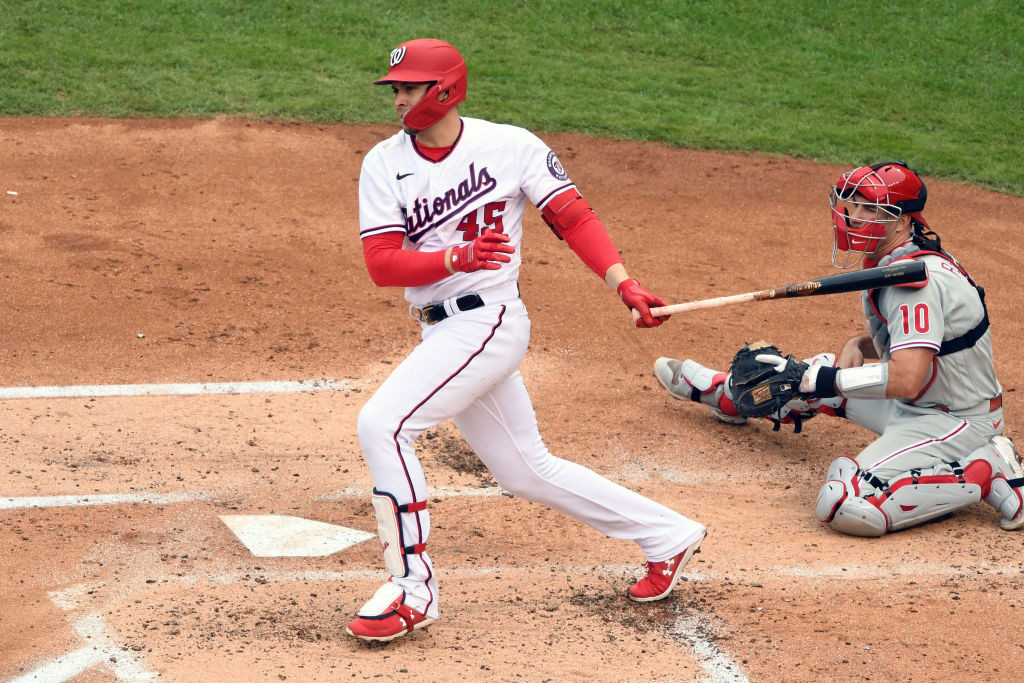 Though there’s still time for more additions before pitchers and catchers report to West Palm Beach – in a mere five weeks, by the way – the Nationals have now assembled what could be their Opening Day 2023 lineup.

They entered the offseason with three holes to fill: Third base, left field and either first base or designated hitter. In Jeimer Candelario, Corey Dickerson and Dominic Smith, they’re hoping they have adequately addressed those needs while constrained to a very tight budget. Those three free agents have a combined $9.25 million salary for the upcoming season, less than Josh Bell alone made last year.

Will that be enough? We’ll see. The success of the Nationals lineup may have less to do with those players’ performances than the performances of returning regulars Joey Meneses, Keibert Ruiz, CJ Abrams and Luis García.

But this is what Davey Martinez has to work with now. The question is how best to arrange this lineup.

Based on what Martinez did late last season, what he’s said this offseason and what’s now available to him, here’s one possible (probable?) batting order for Opening Day …

Corey Dickerson’s major league debut came June 22, 2013, when the then-24-year-old started in right field and batted sixth for the Rockies on a Saturday afternoon in Washington. He doubled twice, helped his team to a 7-1 victory and thought to himself: “This is a nice ballpark.”

“I remember like it was yesterday,” Dickerson said Tuesday, nearly a decade later. “It was amazing. I still remember that first at-bat and just walking out on the field for the first time. I felt like this is what the big leagues is all about. I always remember the Nats’ stadium because of that.”

Dickerson will get a chance to make some new memories at Nationals Park this season, his winding career having now brought him to D.C. as a member of the home team after stops in Colorado, Tampa Bay, Pittsburgh, Philadelphia, Miami, Toronto and St. Louis. Now 33, he signed a one-year, $2.25 million deal with the Nats on Tuesday and figures to open the season as their starting left fielder, playing mostly against right-handed pitching.

It’s been a winding path for Dickerson, not only in the stops he’s made but in the different types of player he’s been along the way. He mashed 24-plus homers in three different seasons early in his career. He won a Gold Glove Award in 2018. He hit .304 with a .906 OPS in 2019. Then while battling injuries and reduced playing time, he focused more on being a good contact hitter in recent years.

Some might look down upon a guy who has worn seven different uniforms the last seven seasons. Dickerson, though, doesn’t view it as a negative.

The Nationals are finalizing a one-year deal with veteran Corey Dickerson, a source familiar with the negotiations confirmed, addressing another pressing need in left field.

The deal with Dickerson, which includes a $2.25 million salary plus incentives, is contingent upon the 33-year-old passing a physical, the source said.

Once it’s finalized, the Nationals will have some more clarity about the makeup of a 2023 lineup that will look quite different from the one they fielded last season. If Dickerson is the primary left fielder, Joey Meneses would likely serve as the primary designated hitter, with the newly signed Dominic Smith at first base. Jeimer Candelario, another new addition this winter, is expected to start at third base.

Even if Dickerson is the Nats’ primary left fielder, he probably won’t play every day, given his longstanding struggles against left-handed pitching. Over his career, the lefty-hitting outfielder owns a .287/.331/.505 offensive slash line against right-handers, compared to .259/.299/.394 against left-handers. The disparity was even greater last season in St. Louis, where Dickerson took only 28 plate appearances vs. lefties and went 2-for-26.

An All-Star with the Rays in 2017 and a Gold Glove Award winner with the Pirates in 2018, Dickerson averaged 30 doubles and 18 homers during his first six full years in the majors. He’s been less productive the last three years, though he still maintained a league-average 100 OPS-plus in 2022 with the Cardinals, batting .267/.300/.399 with 17 doubles and six homers in 297 plate appearances.